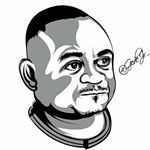 Pierre Liquid, born Pierre Gumbo aka "Konki Master"  is Tanzanian hottest mainstream entertainer. Pierre Liquid became famous and an internet sensation when he introduced skits such as "wooi mama nakufa" "konki master" "konki" hence later becoming one of the most iconic Tanzanian celebrity. Pierre has not only gained massive audience from his homecontry but also to the world. Pierre has had an opportunity to be featured in many interviews and songs also.His trademarks remain satarical and humorous as most would describe him as a comedian.