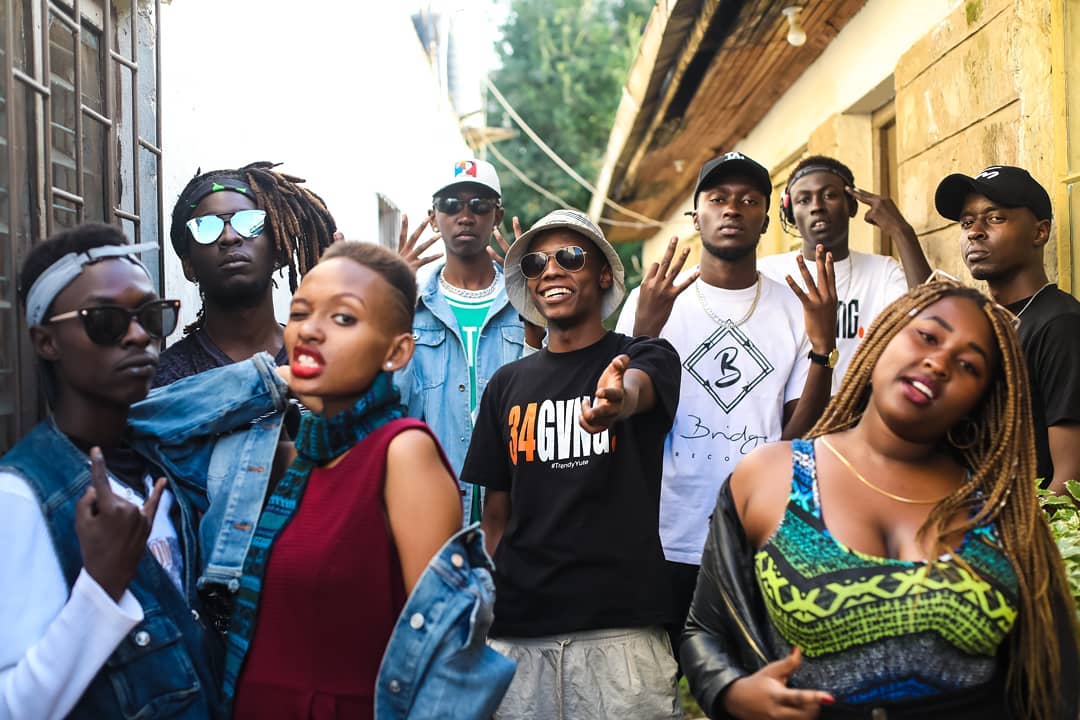 African Music Crew 34 GVNG (Good Vibes No Gangs) is a music crew based in Kenya made up of artists such as Vuva, Hitman Khat, Guantai, Rashad, B Razor, Coco, Shagwah signed under Bridge Records Entertainment. Their

African Music Crew 34 GVNG (Good Vibes No Gangs) is a music crew based in Kenya made up of artists such as Vuva, Hitman Khat, Guantai, Rashad, B Razor, Coco, Shagwah signed under Bridge Records Entertainment. Their famous hits so far include 'Wabebe', 'Poko.T' and 'Olunga'

34 GVNG is a music crew signed to Bridge Records Entertainment, with 34 representing the Hood the artists grew up in and 'GVNG' standing for 'Good Vibes No Guns.The group is made up of members Hitman Kaht(Bridge Boss and producer), Vuva, Guantai, Shagwah & B Razor.'The group came about coincidentally since, all the members were pursuing music individually writing rhymes and having backseat freestyle sessions in hang out spots and Hitman Kaht was also sharpening his production skills.By the time Hitman founded the label the artists were ready to make structured songs and started recording tracks in genres Trap and Trapuka.In 2018, Gengetone which was very similar to Trapuka became popular in Kenya taking over charts and Youtube Streams due to its controversial lyrics. 34 GVNG tapped into the style in early 2019 since they had the sound and flow to make bangers.They made their debut as a group dropping the biggest song that year 'WABEBE' feat Gwaash. This put them on the map and they were ready to put out their next successive single which was Poko.T. This got massive attention gunnering upto 200k views in its first 2 weeks online before being muffled by the Kenyan Youtube Content Regulators. This slowed down their takeover but did not stop the journey since they were able to drop 2 more singles the same year with Olunga charting on radio stations and Teleza dominating DJ mixes all over.The rest is still under documentation, make sure you keep it 34 GVNG to be upto with the journey.